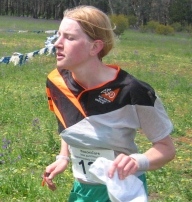 John Toomey and Sarah Dunnage won the inaugural Western Australian Sprint Championships at Curtin University last Saturday. On a 2.5 Km course (with an optimal route of about 3.0 Km), Toomey won the men’s race from Rhys Challen, with Steve Fletcher third. Challen was only 23 seconds behind Toomey at the spectator control with 750m remaining, but hesitation and poor route selection as he left the control (obviously pressured by the numerous spectators!) meant that Toomey’s winning margin increased to 35 seconds by the end of the course. Sten Claessens took out fourth place, leading in Terry Farrell and a fast finishing Eoin Rothery.

In the women’s race, Sarah Dunnage put in a strong finish to overtake Sophie Giles, who was leading by 5 seconds at the spectator control. Giles lost valuable seconds by overshooting the third-last control to concede her lead to Dunnage. For Sarah, this win adds to her Australian W18 Sprint Championship won last year and confirms that she will be force to be reckoned with in sprint orienteering. Kellie Whitfield, who also overshot the same control as Giles, was third, 22 seconds ahead of Cath Chalmers, with Anthea Feaver in fifth place.