Just under 500 competitors across all age classes enjoyed the challenging sprint courses set by Kim Nankervis.

In the W21E division New Zealand’s Lizzie Ingham emerged victorious from Caitlin Young of the Canberra Cockatoos (ACT) with Evalin Brautigam of the Southern Arrows (SA) in third. As Evalin is a citizen of the USA the official 3rd Oceania place was taken by Lizzie’s New Zealand teammate Kaia Jorgensen.

Of note was that 2022 WOC and JWOC representative Nea Shingler of the NSW Stingers competing in the W20 division on the same course ran the 2nd fastest course time 16 seconds adrift of Lizzie Ingham. 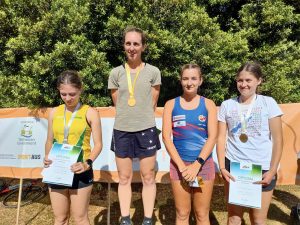 In the M21E division Aston Key of the Victoria Vikings had a commanding 53 second margin over fellow Victorian Viking Patrick Jaffe. Close by in 3rd place was Brodie Nankervis of the Tassie Foresters. 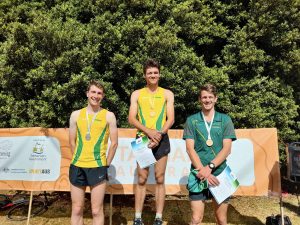 Across the master’s age classes there were some close tussles and some significant winning margins. In the W45A class a 30 second blanket covered the top4 with victory going to visiting British orienteer Sally Calland. By comparison here compatriot Janice Nesbit in the W70A had a dominant 6 minute winning margin. The evergreen Geoff Lawford (ACT) running in a “younger” class almost took victory in the M55A with Shane Doyle (NSW) emerging as te victor in the class. In the M80 class in a field of 9 competitors Alex Tarr (VIC) had a comfortable 4 minute winning margin. While in the W80 class Jean Baldwin (NSW) dominated with a winning margin in excess of 8 minutes.

Racing continues on Monday January 9 in the forests west of St Helens in Tasmania’s north east with the Oceania Long Distance Championships. It will be on terrain new to the sport with the map produced by the late Rob Plowright. It promises to be a worthy test of physical fitness and the capacity to maintain focus and concentration.