The Oceania Long Distance Championships was a fitting test of navigation and fitness in the steep granite strewn hill sides of the Bells Marsh map north west of St Helens.
In W21E New Zealand’s Lizzie Ingham repeated her victory from Saturday’s Sprint Distance with a convincing 12 minute margin over Grace Crane (AUS). Ingham took 84:35 to complete the 9.1km course. Rounding out the top 3 was Anna Sheldon (AUS), a further 7 minutes behind Crane to just pip Emily Sorenson (AUS). 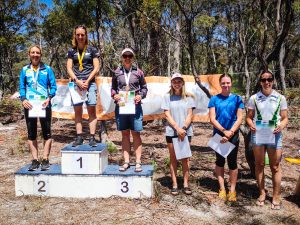 In M21E it was a somewhat tighter race. Aston Key (AUS) also repeated his victory from the Sprint Distance to take the Long Distance title by a touch under 6 minutes from Brodie Nankervis (AUS) and Pat Jaffe a further two and half minutes adrift in 3rd. Key took 97:43 for the 13km course. Outstanding New Zealand junior Zefa Fa’avae finished a very credible 4th. 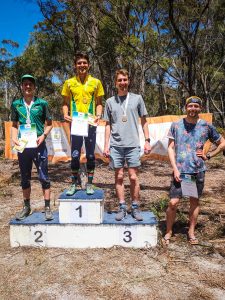 Ingham and Key by taking out the Oceania Regional Championship title in Long Distance now have a personal place for the 2023 World Championships in Switzerland.
In M20A it was much tighter race with just 6 minutes separating the top 6. 2022 Australian JWOC representative Sam Woolford emerged victorious in a time of 91:58 for the 10.3 km course.
Over in W20A British orienteer Rachel Duckworth was fastest on the course to just pip Australia’s Mikaela Gray by 39 seconds. Gray is thus the Oceania regional champion.
Tuesday will be a welcomed rest day for all competitors before the action begins anew on the new Hunt Tin Mine map on Wednesday.
Links to official results, split times and maps for all courses for each Oceania race can be found at https://oceania2023.tasorienteering.asn.au/results-maps