In the Oceania Middle Distance Championships, it was a threepeat for both New Zealand’s Lizzie Ingham in W21E and Australia’s Aston Key in M21E. Both orienteers are now the titleholders of all three individual formats being contested at these IOF Regional Championships.
On the new Hunt Tin Mine map with two intense zones of old alluvial mining terrain Ingham was dominant in W21E. After trailing countrywoman Kaia Joergensen by 1 second at the first control, Ingham led all the way to record a comfortable 2:07 minute victory from Australia’s Grace Crane in 31:39 for the 4.6km course. Rounding out the top 3 was Australia’s Aislinn Prendergast a further 2:08 adrift of Crane.
Key’s victory in M21E was a much tighter affair, finishing the 5.3km course in 29:04 with visiting UK orienteer Jim Bailey taking second 46 seconds adrift of Key. Bailey briefly led Key through controls 3 and 4 after Key had a small time loss on the 3rd until Bailey lost time on the 5th leg to Key whereupon Key led all the way to take the title. Rounding out the top 3 in this class was Australia’s Brodie Nankervis a further 30 seconds behind Bailey.
In W20 the UK’s Rachel Duckworth continued her good form to record fastest time from Australian resident Eszter Kocsik with Nea Shingler in 3rd. Shingler being the first Oceania region citizen took out the title as Oceania Junior Champion in this class.
In M20 the racing continued to be very tight with Sam Woolford just having a touch more speed than Alvin Craig from the pre-warning to take the title by 18 seconds with David Stocks taking out 3rd 47 seconds adrift of Woolford to make in an Australian trifecta. New Zealand’s Flix Hut was a close 4th finishing 1:17 behind Woolford. A measure of the closeness of the class was that the top 13 were all within 7 minutes of each other.
Links to all maps, results and splits can be found at: https://oceania2023.tasorienteering.asn.au/results-maps as well as results and splits on Australian Eventor 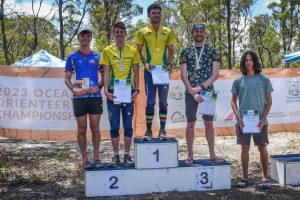 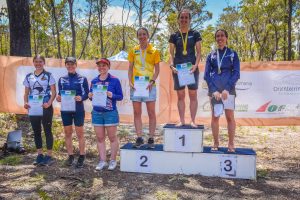